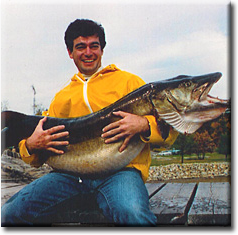 The Ontario record Muskie weighed 65 pounds and measured 58 inches in length with 30.5 inches in girth.

The story goes that it was Ken's first time Muskie fishing. I guess beginner's luck is true sometimes.

It's starting to look as if Toronto accountant Ken O'Brien, if he just sits still, will wind up as the holder of the world record for muskellunge.

That's for a fish he caught in Georgian Bay in 1988, a fish that is slowly but surely moving toward the top of the list for cheating is uncovered in the old records.

The O'Brien fish, a whopping 65 pounds, is currently the number three muskie in the world. But in the world of muskie fishing, old records have a habit of being thrown out. And, according to the National Post and the Michigan Muskies Alliance and. the World Record Muskie Alliance, (www.worldrecordmuskiealliance.com), the current record holder is about to be turfed out and the number two fish is also being studied for misrepresentation. The current record is held by Wisconsin angler Louis Spray, with a 69-pound, 11-ounce fish he caught in 1949. Second spot is held by a 67-pound, 8-ounce muskie caught by Wisconsin angler, Cal Johnson, also in 1949.

Those two disqualifications (if they happen) would move O'Brien's 65-pound fish to the top of the world record listings. And there is little doubt about the authenticity of the O'Brien muskie (the current Ontario record holder).

O'Brien landed the fish during an annual (mostly fun) challenge muskie fishing match between two teams of anglers on Georgian Bay. No shortage of credible witnesses. The weighing of this fish, on certified scales, was witnessed. And the famous photo of a beaming O'Brien was taken by John Power of Beaverton, at the time outdoor columnist for the Toronto Star. Power, a man who is famous in the outdoor world, is also a suspicious sort and would have been all over any hint of fraud or fakery, as fast (and as savagely) as a muskie hitting a bucktail. I don't think there is any doubt about the legitimacy of O'Brien's fish. At the time he caught the fish, O'Brien was a sometime angler, not one of the muskie hunting fanatics that this fish seems to produce.

For some reason or other, most likely just for the bragging rights, old-time muskie hunters seem to have been more than a little fast and loose with the truth.

It was a Canadian crime scene investigator, Dan Mills who applied modern forensic science techniques (photogrammetric analysis) to photos of the Spray muskie. Mills was asked by an Illinois-based organization, the World Record Muskie Alliance, to study the photos. Mills is a former surveyor and Transport Canada inspector who uses science to reconstruct highway accidents and to determine the height of crime suspects based on photographs.

He concluded that the Spray muskie was a likely fraud, a fish too small to have weighed in at 69 pounds, unless weight had been added to it. Simply put, the fish in the photograph was too short and too slim to match the measurements Spray gave it. Mills figures the fish is 55 inches long, not the 63 inches Spray claimed, and says it had a girth of 10 inches, not the 31.25 inches Spray recorded.

If this fish is disqualified by the U.S.based National Fishing Hall of Fame, it would move the Johnson fish (67 pounds, eight ounces) to world champion.

But Mills has already been asked to apply his forensic skills to photographs of the Johnson fish, which has long raised doubts in anglers' minds.

Ironically, the Spray and Johnson fish moved to first and second spots in the record books only after investigations turned up other misrepresentations in muskie record claims. Ten years ago, a St. Lawrence River fish caught in 1957 was ruled to be a hoax, moving Spray and Johnson up the record-book ladder.

Fascinatingly, the motivation behind misrepresenting big muskies seems only to have been pride, publicity and bragging rights. There was no huge cash prize, not even a hint of equipment endorsement rewards. It seems that they wanted to be world-record holders, not much more than that.

For as long as humans have eaten fish, we have lusted after the most, the biggest, the best. Made sense as a survival strategy, and may even have given the lucky fisherman a boost in status within the clan, or back in the cave.

All anglers, I think, are willing to stretch the truth just a little. Mostly, that's safe stretching, bragging about the one that got away. But even with a fish in hand to be weighed and measured, the temptation is still strong.

As I write this column, I'm sitting under a (replica) mount of a monster lake trout. It's a scale model of a fish I caught in sub-Arctic Manitoba. It's accurate down to the quarter-inch, based on photographs and measurements of length and girth.

I know for certain that the fish was estimated to weigh 49 lbs and a few ounces (I forget how many). However, if you ask me what the fish actually weighed, I'm most likely to tell you 50 lbs. After all, what's a few ounces among friends.