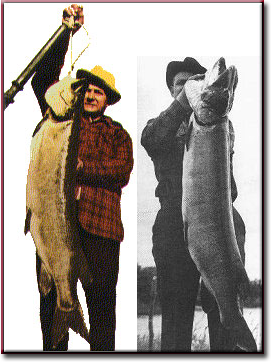 Aug 6,1992, Art Lawton's world record Muskie, originally thought to have been 69 pounds 15 ounces and 64 1/2 inches long, was discovered to have been greatly exaggerated in size and was officially disqualified jointly by both the National Freshwater Fishing Hall of Fame and the IGFA.

As a consequence of that decision, Louie Spray was officially reinstated as the all tackle World Record Muskie holder. The Muskie was 69-pound, 11-ounces. The great fish was caught out of the Chippewa Flowage, Wisconsin in 1949.

Below: The picture below is probably the highest quality photo in existence of Louie Spray and his Muskie.

Below is a picture of Art Lawton's Muskie, which was disqualified as the world record. It's still a beautiful fish and one of the largest Muskie ever caught so you still have to give Art's Muskie some appreciation.