One migration followed by another. Driven by ages of evolution and ever-changing reservoir conditions in the south, southern muskies are almost constantly on the move. According to many fisheries biologists in Kentucky, one of the major problems with maintaining high quality musky fisheries is the tendency for muskies to migrate long distances up incoming rivers and downstream through dams into tailwater areas. Recurrent flooding, common in the south, compounds the problem by flushing more water and fish through Corps of Engineer's dams and flooding headwater areas allowing muskies to move into areas upstream.

It has been said, and rightly so I believe, that most musky fishermen are products of evolution from other angling interests. As such, our tendency is to place muskies in a box, expecting them to behave like fish we targeted before. Big mistake. Muskies have little in common with bass and walleyes. Northern pike and muskies along with other members of the suborder Esocoidei, belong to the order Salmoniformes of a group of fishes called teleosts. These fishes are, relatively speaking, primitive on the evolutionary scale. Evolution within an order of animals produces specialization and more profound differences between relatives. More primitive orders on the other hand tend to be less specialized, with members bearing more similarity in anatomy and behavior to each other.

Muskies are much more closely related to salmon and trout than to either smallmouth or walleyes, for example. Anatomical similarities to trout and salmon are striking. Behavioral similarities are most likely to be inherent also, I believe. Trout and salmon are spectacular migrators. Muskies, on a limited scale, show these tendencies as well, as do northern pike. Many times, I have followed suspended northerns all over a big shield lake for several days as the wind direction changed. Esocoids are primitive and unique.

I believe, that most musky fishermen are products of evolution from other angling interests. As such, our tendency is to place muskies in a box, expecting them to behave like fish we targeted before. Big mistake. 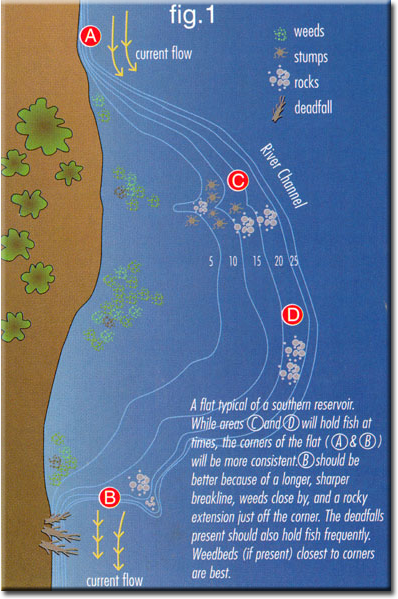 Migration is truly a way of life for these fish. Finding a concentration of muskies in one location today does not guarantee a single follow tomorrow. To consistently contact fish in a system, developing an evolving knowledge of holding points for migrating fish is essential. In most southern and midwest reservoirs, flats are both a sanctuary and an obstacle for muskies on the move. Rapidly falling water during winter drawdown forces muskies to travel long distances to wintering areas very quickly. On Buckhorn Lake, these fish often must travel 75 miles or more in a few short days. Flats still underwater must be either crossed or gone around, slowing progress to safer water. Forage fishes often use flats extensively for feeding areas and refuge, attracting predators. Muskies relocating from one area to another feed on the flats and hold on key areas, often for some time before moving on. On deeper flats that drop off abruptly close to shore then level out at 20 or 25 feet or so, muskies often suspend near baitfish, usually over the breaklines or edges of the flat. On tapering flats that run hundreds of yards before reaching these depths, muskies can suspend much farther from shore over the same depths. Most likely, though, if flats start off shallow and taper gradually, the corners of the flats are the key areas. Corners of flats are formed when the river or creek channel running around the periphery of the flat bends back into the shoreline, forming the upstream or downstream endpoint of the flat. Top of maps makes these areas easy to find (fig. 1).

All flats are not created equal. Most have areas of cover that attract baitfish and predators. Brushpiles, rocks, stump beds, and ditches all can hold fish. The closer to the periphery of the flat and the breakline the better, except for the early spring and late cold water periods. Generally, as a fish ages, she becomes more cautious. Instinctively, big muskies avoid high-risk areas. Shallow water with no cover may be used, but usually infrequently for short periods of time. Obviously, flats with heavy weed growth hold fish. Cave Run and Buckhorn Lakes in eastern Kentucky and Dale Hollow Lake on the Kentucky Tennessee border have extensive weed growth on flats most years. However, extensive spring flooding and muddy water can reduce weed growth on these lakes, changing musky locations dramatically. Many of our reservoirs, including Green River in central Kentucky and Lake Shelbyville in Illinois never get substantial weed growth. Musky locations here are usually more predictable, and the fish are concentrated in smaller areas. Recognizing these spots and fishing them correctly is essential in reservoirs. Again, rock piles and wood cover on flats certainly hold fish, especially when located on sharp breaklines along the edges. The tendency for muskies to use the old river or creek channels as migration routes, however, make the corners of the flats better. By and large, the corners will hold fish more consistently than other features on the margins of the flat.

Migrations are riot random. Relocating muskies use charnels like interstates. Most of -the migrating fish will tae can the big road. Were that road first contacts a major piece of structure, whether it e a flat point, or sunken island, will hold more and bigger fish day in and day oat than anywhere else.

They offer the advantages of easy access to either the flat or channel areas departing the area, increased current as water is forced to change direction as the channel bends, exposure to migrating baitfish, and the security of deep water. Migrations are not random. Relocating muskies use channels like interstates. Most of the migrating fish will be on the big road. Where that road first contacts a major piece of structure, whether it be a flat, point, or sunken island, will hold more and bigger fish day in and day out than anywhere else. Muskies using a flat as a feeding area will hold in key spots, moving up on the flat to feed and back off again to staging areas. Periods of high activity when muskies move away from staging areas and up onto the flats to feed may be infrequent, depending on conditions. Generally, the more shallow the flat, the less time spent in the interior and the more spent on primary staging areas. During drawdown, muskies seldom venture far into the rapidly falling shallow water. 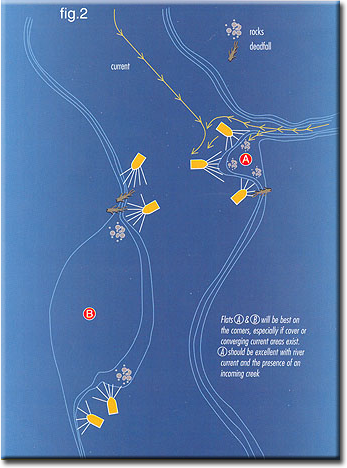 Migration is truly a way of life for those fish. Finding a concentration of muskies in one location today does not guarantee a single follow tomorrow. To consistently contact fish in a system, developing an evolving knowledge of holding points for migrating fish is essential. In most southern and midwest reservoirs, flats are both a sanctuary and an obstacle for muskies on the move.

In early fall, muskies in southern reservoirs relocate to the cool water inflow of feeder creeks. Winter drawdown usually forces them back onto the main lake basin by early October. Trolling or casting the deep edges of flats with big crankbaits like 7 0-inch fakes, big Believers, and Grandmas works on clear; sunny days. Cooling water warms on the surface, and big gizzard shad school around the breaklines of flats suspended in the warmer water. On overcast, windy days, the bigger fish seem to move back to isolated structure, especially the corners of these same flats or isolated heavy structure, like brushpiles or house foundations. Drawdown can be dramatic. The Corps of Engineers will routinely draw down its lakes a foot or more a day. The rapidly falling water pulls baitfish off the flats, funneling them through a gauntlet of predators waiting at key spots. I have several of these spots on the musky lakes I fish that I check routinely.

Depending on weather conditions and time of year, jerkbaits, crankbaits, or big spinnerbaits work well with these fish. Jerkbaits during cool water periods usually will move big fish in this pattern. Suicks, Burts, and weighted Squirrley Burts are among my favorites. Gliders sometimes work great as well. During warmer water periods, crankbaits like Slammer deep divers, Cranes, and Ernies can be walked down to the edge of the flat and off into the channel. Triple Ds should work over deeper edges and over deeper structures. Big spinnerbaits can be deadly here. Musky Copters by L & C Tackle, Grim Reapers, and numerous others work well. I never leave a spot like this without making a few casts with a spinnerbait, running it along the edge of the corners and the adjacent rim of the flat.

If muskies have a mind, no doubt it changes like flipping a switch and often for no apparent reason. In my humble opinion, muskies are more fluid in nature and more unpredictable than most any freshwater gamefish. Several patterns usually exist simultaneously. Their unpredictability and low population density make finding them a challenge, especially bigger fish. Unless I am relatively certain I know where several fish are located or have high confidence in a particular pattern at the time, I spend the majority of my time fishing staging areas for transition fish, with edges and corners of flats my favorites. I am convinced that at almost any given time a significant percentage of the musky population in a lake will be in transition. Key holding areas offer the best chance of contacting big fish in these systems.